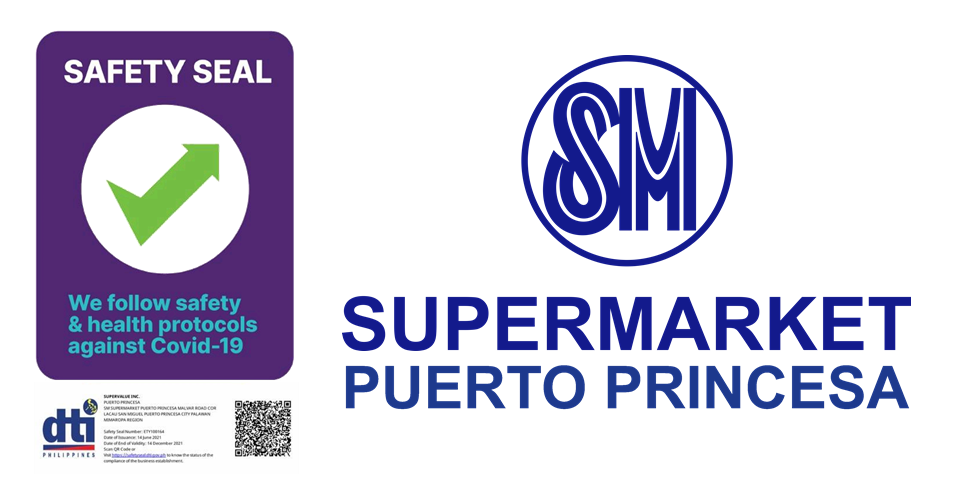 Being the first Supermarket to prove its compliance with the minimum public health standards set by the government, SM Supermarket Puerto Princesa has been awarded a Safety Seal by the Department of Trade and Industry – Palawan.

“Through the safety seal certification, the government aims to increase public confidence in businesses at this time of the pandemic while also ensuring compliance in the minimum health protocols. This is because the signage of the safety seal —which affirms that an establishment has been found compliant with these health protocols— will assure customers that it is safe to be in that establishment,” DTI Secretary Ramon Lopez said during a virtual presser.

SM Supermarket was awarded the good housekeeping seal after DTI-Palawan representatives conducted its physical inspection in its facility to ensure that the supermarket complies with the minimum health protocols and that it uses or integrates its contact tracing with StaySafe.ph.

“As part of SM’s commitment to better serve our employees and customers as well as provide a safe shopping experience, SM Supermarket implements a no face mask and face shield, no entry policy, regularly conducts sanitation and disinfection procedures, and secures other health standards are being observed,” Maidja Saliente, mall manager of SM City Puerto Princesa said.

The Inter-Agency Task Force for the Management of Emerging Infectious Diseases (IATF) launched the safety seal certification program to give consumers the assurance that the establishments with the good housekeeping seal maintain minimum health protocols.

The IATF also encourages consumers to patronize establishments with safety seal, which is renewable every six months.